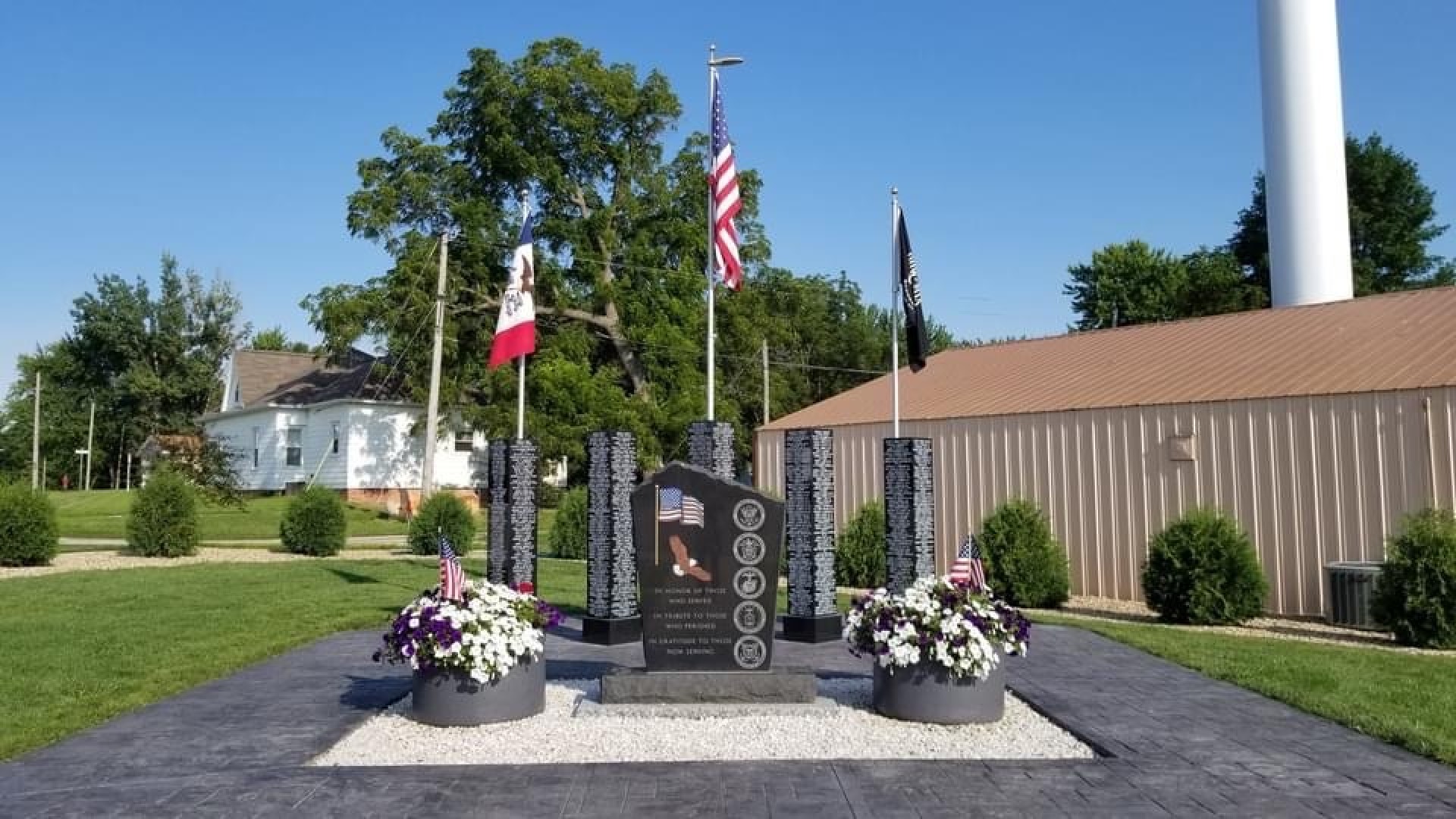 While it might seem like a simple memorial, there are powerful stories in the stones in the Pomeroy Veteran’s Park. This remarkable tribute proves how a small Calhoun County town can achieve big things.

While it might seem like a simple memorial, there are powerful stories in the stones in the Pomeroy Veteran’s Park. This remarkable tribute, which has been featured on WHO TV 13 in Des Moines, proves how a small Calhoun County town can achieve big things.

“Like many people, I have a veteran in my family,” said Cindy Loots, the major of Pomeroy who spearheaded this $50,000 project. “My father, Wayne Hansen, served in the Army and was stationed in Texas, waiting to be deployed when World War II ended. It became a passion of mine to make sure Pomeroy-area veterans’ names would be preserved.”

Calhoun County communities have long supported local veterans. The idea for the Pomeroy Veteran’s Park came about 20 years ago from Kent Gray, whose father-in-law, Wendel “Pete” Stuart, had recently passed away. Pete had served in the U.S. Army during World War II and was active in the Amvets and American Legion organizations in Pomeroy. Gray thought a Veteran’s Park would be a fitting tribute for Stuart and other veterans.

Stuart’s memorial money, along with additional money from his family, helped fund the development of the Pomeroy Veteran’s Park. Other community members also supported the project.  Nancy Olson of Twin Lakes donated a vacant corner lot in downtown Pomeroy where her parents, Bert and Mabel Drommer, ran Drommer Produce and Hatchery in years past. The Dr. J. R. Rosdail family and the Pomeroy Amvets also became early supporters of the Pomeroy Veteran’s Park.

Community volunteers helped design the Pomeroy Veteran’s Park. Area veterans or their families submitted names and other pertinent information to be engraved on commemorative bricks. More than 320 bricks were installed in the park to honor area veterans who had served in the U.S. military. A 5-foot-tall black granite monument, designed to honor members of all branches of the U.S. military, became the focal point of the park.

Time and weather took a toll, however, on the Pomeroy Veteran’s Park. The personalized bricks displaying the names of area veterans crumbled, and some were almost unreadable. In addition, weeds were growing in the cracks between the bricks, which needed continuous maintenance. Winterkill damaged the columnar arborvitae on the park’s south and east borders. “These problems would only worsen as more time passed,” Loots said.

After several community members started discussing these concerns around 2018, some became researchers, too. They visited other veterans’ parks and contacted multiple companies about selecting the right materials to improve the longevity of the memorials in the Pomeroy Veteran’s Park. “We learned that black granite pillars would not only keep the names forever, but also eliminate weeding between bricks,” Loots said. “They also would look great with the black granite memorial already in the park.”

Loots knew it would be challenging to make these improvements a reality, and it would take time and money. The first challenge? Raise the $50,000 needed to complete the project. Loots began applying for grants, submitting articles about the project to area newspapers, and spearheading fundraising efforts.

The first donation came in the summer of 2018 when Jane Streit Nestlebush of Florence, Arizona, heard about the renovation project at a class reunion. She made a donation in memory of her father, Arnold Streit, and her brother, Robert, who were veterans.

The second donation came a couple months later when Michael Schultz of Des Moines brought his friend Jay Rosdail from Knoxville to see Rosdail’s tombstone, which had just been set in Union Cemetery. Loots was walking the cemetery, gathering veteran’s names and information from tombstones. When Schultz learned what she was doing, he reached into his pocket, handed her money and became the second donor for the renovation project.

The project received more funding from the Calhoun County Community Foundation and MidAmerican Energy after Loots wrote additional grant applications to include veterans from the Jolley and Knoke areas. “Total donations from businesses totaled $24,500 and gave us great hope this project would be completed,” said Loots, who added that nine individual families gave $1,000 or more toward the project.

All donors who contributed more than $1,000 had their businesses or names engraved on a bronze plaque, which is mounted in the park. In addition, 77 individuals/families also contributed toward this project.

These funds allowed Pomeroy to buy the black granite pillars, but then came an unexpected, new challenge—the COVID-19 pandemic in 2020.

“Those black granite pillars ended up sitting on a ship near Seattle, Washington, for more than a year before they were released to the polishing company in Minnesota,” Loots said.

The COVID-19 pandemic also delayed Pomeroy’s 150th anniversary celebration. At times, it seemed like everything was on hold indefinitely. Finally, things started returning to normal, and the project moved ahead, Loots said.

This extra time allowed Loots to do more research about local veterans. “We included not only the veterans’ names, but often additional information, including their branch of service, rank, and specific jobs or battles,” Loots said.

After all this information was engraved on the five black granite stones that were installed in 2021 into a base of charcoal-colored, decorative concrete. Two Prairiefire crabapple trees were planted nearby to provide early-spring color to the park, which also received new flag poles and flags. Techny arborvitae were planted to provide a year-round green border on the south and east sides of the park.

The community dedicated Pomeroy Veteran’s Park in 2021 during Pomeroy’s delayed 150th homecoming celebration. “It was great to finally reach this goal,” Loots said.

Currently, the monuments include the names of 39 Civil War veterans, one Spanish-American veteran, 134 World War I veterans, 323 World War II veterans, 97 Korean conflict veterans, 54 Vietnam veterans, and 17 Gulf War veterans, including Operation Iraqi Freedom, the global war on terrorism, and Operation Desert Shield/Storm. In addition, there are 87 veterans listed who served at other times, Loots said. “There is room to add more veterans’ names,” she added.

There are many remarkable stories in the stone at the Pomeroy Veteran’s Park, including:

“We need to honor our veterans”

Some visitors to Pomeroy Veteran’s Park have noted that the granite pillars in the memorials remind them of the Twin Towers in New York City. Others remember their own family members when they pay their respects.

“We need to honor our veterans,” said Nancy Olson, whose ancestors listed on the monuments served in the Civil War, World War 1 and World War 2. One marker includes the name of her late husband, Duane “Oley” Olson, who served in the Korean conflict.

Olson appreciates the colorful flowers in charcoal-colored planters that bring the park to life during the warmer months. Others, like Ron Hanson of Pomeroy, volunteer their time to mow and maintain the park. All this shows how a small town can make something big happen, Loots said. “We’re proud of our veterans and want to preserve this history.”